Light and fluffy Cinnamon Cupcakes with a dreamy cinnamon buttercream frosting - a perfect treat during the festive season!

I love baking with cinnamon during the festive season. There's something about this spice that gives a warm feeling and fills a kitchen with beautiful aroma as the days get greyer and colder. Granted, cinnamon is not for everyone; you either love it or hate it.

But if you identify as someone who loves it, then this recipe is for you! These Cinnamon Cupcakes are infused with cinnamon throughout! They're a cinnamon-lover's dream and make perfect treats for the festive season. The sponge is light and fluffy, based on my basic vanilla sponge (made for these Funfetti Cupcakes), and infused with ground cinnamon.

The Buttercream frosting also contains a pinch of cinnamon - I didn't add too much cinnamon here as I didn't want the cupcakes to be too overpowering, but as always, this amount can be adjusted to your likings. Finally, I sprinkled these Cinnamon Cupcakes with some cinnamon sugar and added some store-bought Christmas-themed mini cookie decorations.

For the cinnamon cupcake sponge, you will need:

Flour - You can use cake flour or AP flour. Weigh your flour using digital kitchen scales for accuracy.

Cinnamon - You'll need around 2 (to 2½) teaspoons of good-quality ground cinnamon. Cinnamon can be overpowering, so less is more here.

Salt - To balance the sweetness.

Butter - Use unsalted butter if possible. If using salted butter, eliminate the extra salt above. Butter needs to be softened to room temperature before using.

Sugar - Granulated or caster sugar work well for these cupcakes.

Egg - For structure and texture. Again, use room temperature eggs (do not use cold eggs or the cupcake batter will curdle).

Milk - You can use semi-skimmed or whole milk. I suggest you bring out the milk to room temperature before using (or warming it slightly - for around 10-15 seconds - in the microwave) to avoid curdling of the batter.

For the cinnamon buttercream frosting, you will need:

Butter - Same as for the cupcake sponge, use room temperature unsalted butter.

Cinnamon - Just a pinch of ground cinnamon for cinnamon-flavored buttercream!

How to Make Cinnamon Cupcakes

Preheat the oven to 175°C (350F) and line a muffin/cupcake tin with cupcake liners.

Cream the butter and sugar together in a large bowl of a stand mixer fitted with the paddle attachment (or use a handheld mixer). Use a spatula to scrape any ingredients from the side of the bowl.

Add milk, alternating with dry ingredients, in two additions and mix until just combined. Do not overmix.

Bake in the center of the oven for 18-24 minutes, or until a wooden skewer inserted into the center comes out clean.

Transfer sponge to a wire rack to cool completely before frosting.

Place softened butter in a large mixing bowl of a stand mixer fitted with the whisk attachment. Whisk for 30 seconds - 1 minute or until butter is smooth.

Buttercream frosting can be made up to 2 days ahead and chilled until ready to use. Bring to room temperature before using.

Transfer buttercream to a piping bag fitted with the star tip attachment (or your favourite frosting tip) and pipe over cooled cupcakes.

Sprinkle with cinnamon sugar (mix a tablespoon of granulated sugar with ½ tsp. ground cinnamon) and add your favourite cupcake toppings!

Tips for the Perfect Cupcakes

If using refrigerated butter and/or milk, place them in a microwave-safe bowl and heat them for 10-15 seconds in the microwave before using.

Weigh your ingredients using digital kitchen scales - can't stress this enough! These scales can be bought for less than a set of measuring cups.

Do not overmix the batter once you start adding dry ingredients - this will results in a dense sponge.

How to Store Cinnamon Cupcakes

These cupcakes are best served fresh, on the day of baking, as the sponge will begin to dry out after that. However, they can be stored in an airtight container at room temperature for a day or in the refrigerator for up to 4 days.

I do not recommend freezing the cupcakes/sponge.

For best results, I highly recommend preparing the batter and baking the sponge on the same day you want to serve these cupcakes. The buttercream frosting can be made up to 2 days ahead and chilled until ready to use. Bring out to room temperature before piping.

Other Cupcake Recipes You Will Love 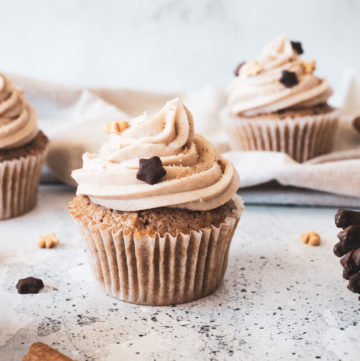 Thanks for stopping by! At The Classy Baker you will find sweet and savory baking recipes inspired by Mediterranean and Asian ingredients and influences.